The general use of X-ray technology in radiology pertains to electromagnetic radiation that is capable of creating an image of your internal structure, with the resulting photo showing contrast differences between areas of high density and low density. An X-ray image shows dark areas where the rays travelled completely through the low density matter (such as with flesh) and shows light areas where the rays were blocked by high density matter (such as bone

.X-rays are most often used to photograph bones and internal organs, but can also aid in the detection of pathology of the skeletal system and some disease processes in soft tissue.

Some notable examples are the common chest X-ray, which can be used to identify lung diseases such as pneumonia, lung cancer or pulmonary edema, and the abdominal X-ray, which can detect intestinal obstruction, free air (from visceral perforations) and free fluid (in as cites).

X-rays may also be used to detect gallstones or kidney stones which are often (but not always) visible. 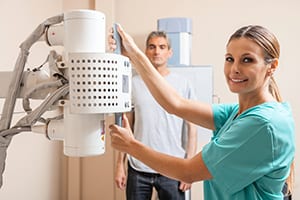 Fully Accredited by the
American College of Radiology